How to create a wildflower meadow 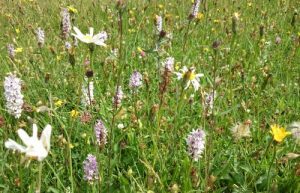 Orchid species suitable for meadow areas are: Common spotted, Green winged, Southern marsh (damp), Northern marsh (damp) Early purple, Greater butterfly, Heath spotted (acid). If you are creating a new meadow area, let it establish for at least 2 years before adding orchid plants. When orchid seed is present in a seed mix, or from a plant, it will germinate and grow only if the necessary fungal partner exists in the soil. For the more common species it is likely to be present and self-sown orchids would appear after 2-3 years and flower in 3-5 years.

A suitable site for a wildflower meadow has full sun, fairly low fertility and few perennial weeds. Any area chosen should be surveyed to make sure you are not destroying an area already rich in biodiversity. Consider the nutritional state of the soil and the soil type. Any plants or seed brought in should be compatible with the soil conditions and preferably of local origin.
There are two methods for the creation of a wildflower meadow: Adding seed to existing grassland, and sowing a new meadow on bare soil. The method chosen will depend upon the existing flora on the site.
On existing grassland you need to identify the grasses present. This is most easily done in summer when they are in flower. If the grasses are mainly fine-leaved, short (up to 70cm including seed head) and include Meadow foxtail, Common bent,  Sweet vernal grass, Yorkshire fog and Crested dogstail, then the grass can be kept and diversity increased by addition of seed. If the grasses present are predominantly tall, wide-leaved, clump-forming or form a thick, dense thatch, e.g. couch grass, Deschampsia or rye grass, the turf should be stripped off, sprayed or ploughed in and seed sown into bare soil. Turf stripping has the advantage of removing a lot of fertility as well as the unwanted plants matter.

Perennial weeds such as docks, creeping thistles, brambles and nettles are an indicator of fertile soil and their seeds can lie dormant in the soil for many years. If possible you should choose a more suitable site for your wildflower meadow. If you are removing a lot of these weeds it is well worth devoting an entire growing season to eradicating weeds before sowing in autumn. The site may be ploughed and cleared with several applications of weedkiller. The chemical-free method is to plough and then spread black plastic mulch for at least 6 months before sowing. If you have buttercups identify the species: creeping buttercup is an invasive weed, meadow buttercup is a meadow flower. After eradication of the weeds do not cultivate deeply again as this will raise another lot of weed seeds to the surface. Cultivate the top couple of inches of soil to create a firm, fine seed bed.
If you have a bare soil site where perennial weeds are not a problem e.g. an arable field, it is still advisable to cultivate some weeks or months before sowing meadow seed. Any weed seeds which germinate in the seed bed may be sprayed or hoed out before sowing. The common arable weeds such as fat hen, spear thistle, red deadnettle will appear in the first year but they are annuals or biennials and are not going to be a long term problem because they are species adapted to disturbed soil and will die out naturally.

A local provenance meadow seed and grass mix can be sown August to October. The seed mix should include yellow rattle, a semi-parasitic annual which reduces the strength of the grasses and so helps the more delicate wild flowers to thrive. Some seeds, such as yellow rattle will need a period of cold weather before they will germinate (stratification). Sow seed mix into bare soil at 4g/m2 or 40kg/Ha (16kg/acre), you can mix the seed with sand or sawdust to make sowing more even. Broadcasting by hand is often easiest, a seed or fertiliser spinner may be useful. Firm the soil by rolling or treading but do not cover, drill or bury the seed. Sow just before rain to wash the seed in slightly. Water in dry periods where possible.

Existing lawn or pasture can be successfully sown with meadow flowers if it is made up of fine grass species rather than tall, broad-leaved, vigorous or clump-forming grasses (e.g. couch, rye grass, cocksfoot, false oat grass). The sward should be roughened with a rake or chain harrow to create pockets of bare soil making up 1/3 of the total area. Alternatively every third strip can be sprayed with weedkiller, lightly cultivated and then sowed. The sowing rate on existing grassland is 1-2g/m2 or 10-20kg/Ha (4-8kg/acre) The seed mix used should be a locally sourced mix of approx. 30% flower seed 70% grass seed and the meadow grasses will gradually replace any less well adapted existing grasses.

The first year there will be few flowers apart from yellow rattle, any plug plants and a few daisies and clover. Keep the sward short until the end of March to prevent the stronger-growing grasses from out-competing the wild flowers. Always remove cuttings. Weed out or spot-treat any perennial weeds which appear. You may decide to top annual weeds by doing a high cut in April. Do not cut later than that as you risk taking the tops off the yellow rattle plants.
The hay cut in the first year can be fairly early. As long as the yellow rattle has set seed (mid-July) you can cut for hay, bale or rake off all cuttings. Through the rest of the summer, autumn and winter the sward should be kept short like a lawn either through grazing or mowing.

In following years cut the sward until March then let it grow up, flower and set seed. Cut the hay any time from late July to September after all the plants have shed their seed. Remove all cuttings to gradually reduce the soil fertility and to avoid leaving a thatch which will inhibit the growth of next year’s flowers. Regrowth may be mown several times during the autumn and winter to prevent the grasses from becoming too dominant, or the meadow may be grazed at low intensity between August and March. On a field scale, meadows grazed over autumn or winter tend to be the most successful.  Seed of yellow rattle may have to be reintroduced in year 2 or 3. It is an annual and it may be lost if it fails to establish and seed in year 1 or 2.

The decision will depend on two factors; the species present and the weather. If you have late flowering species such as betony, devils-bit scabious, field scabious, yarrow, wild marjoram you will need to leave the meadow standing until September when they shed their seed. This is not a problem as long as you do not have tough grasses or other perennial weeds threatening to dominate. If so you could cut the weedy areas earlier and more regularly, whilst leaving the late flowering areas to set seed. You may want to consider this when positioning your plug plants in the first place. You could cut earlier (end of July) 2 years in 3 and later (early September) every 3rd year until the weeds are under control. The late flowerers are all perennial so it will not harm them to be cut back early in some years.
Some years the summer is wet and you cannot take machinery onto the land to cut when you would wish to. Compacted ground is very bad for wildflower meadows so do avoid driving on it in wet conditions. If it can be grazed by cattle and/or sheep you could graze without first cutting the grass and this would be better than leaving the grass to flop and rot. At some point over the autumn the sward will need to be cut and cleared even if the hay is useless. Leaving a thick thatch will be very detrimental to the next season’s flowering species and will encourage dominance of grasses and weeds.

Please be patient. Creating a beautiful meadow from seed will take 3-5 years and from existing grassland will take 5 years + depending on the existing species. A well-managed meadow will go on improving over 15-20 years.